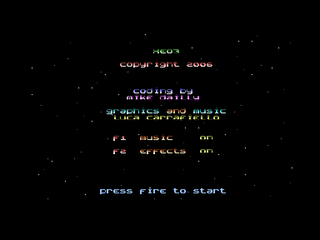 Now that I've saved a couple of K, I thought i'd better use it for a frontend before I use if for something else. I've already said that the front end will be pretty basic looking, theres just about enough memory to do one without having to load stuff in. Even with a turbo loader, I just dont really like having to load in the front end. You should be able to get there without having to load first. The game flow will be spoiled once you leave level 1 since if you die on level 2, you're going to have to load level 1 to start again - that can't be helped. But at least while you get used to the game, it's a pretty smooth and quick turn around.
So, here it is... basic, but functional. The text might change, but this is the basic look.... a logo would probably help I guess....
Posted by Mike at 1:10 pm

Don't forget to reserve a few hundred bytes for the highscore table (and a highscore saver!), they're what makes a shooter worth playing in the long run =)

I would second doynax tho, don't forget a highscore table/saver.

Yeah...gonna try, but thats probably the first thing to go if theres no memory.. :(

(the SID->TED freq convertor needs to wait to see if theres even enough memory to fit it in!)

Okay, then load it off disk only if you get a highscore.
Don't even think of dropping it entirely though, without it there's just no motivation to continue playing when you've completed the game once.

You HAVE to have a hiscore saver! Why else play? Why even HAVE a hi score if you're not going to track it.

LOL... what, can't remember your best score? I think you need a memory game instead! :)

There's a *big* difference between memorizing a highscore and having proof :)

Reaching any of the spots on the highscore table can also be quite satisfying whereas almost beating a mental score doesn't count for much. Losing spots to a friend on the table can create some interesting competitions..

Why not offer a simple game over screen with an option to continue playing or drop back to the intro screen (but always load it anyway if the player has a new highscore of course)?
A fast way of resetting the game mid-level would be nice too, since for me at least it often takes a few minutes to get in the "zone" (i.e. get the adrenaline flowing).

hahahaha...I could "prove" any score by simply overwriting the score with my own values Writing to disk proves nothing.

But I'd bet most people wouldn't. At least not to themselves. :-)

Well, a high score table is a MUST :) Go for the original initials only type (three chars), that adds to the classy feel I think.

Nice use of ECM but the colors could need a little tweaking (I know, it's not set in stone, yet). The 0x luminances are pretty dark and using them on the lowest lines makes them almost disappear. Stick to brighter once! Even if it's using less colors I like the raster bar look, for this char set something like... 2x 3x 4x 5x 6x 5x 4x 3x

I considered adding some level of obfuscation to my high score saver, but I then decided to use those bytes better. If someone is going to cheat they're going to do it anyway, and I definitely don't want to give cheaters the satisfaction of beating my puny attempts to stop them.

Well, since Im releasing the source, theres not much point - and besides, if people want to cheat, they just have to use an Action replay or something.