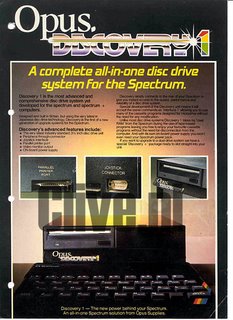 Done nothing at all tonight.... well, not quite nothing. I got an Opus Discovery disk drive for the spectrum months ago from ebay for a steal (around £14 I think), problem was it didn't work. I've spent the past few nights tinkering with it and I finally figured out what was wrong. The disk drive itself simply wasn't working. After pulling it apart and putting it back together the drive started up and kinda worked, but I got disk errors. So, I dismantled it again and saw it was more or less a standard PC floppy drive, but plugging in a PC floppy didn't work. Probably because back then they were XT drives. So I was trying to think of a way to get an old XT drive to try, and searched the web for one, but with no luck. Or rather no luck I want - $170!! No thanks.

Then I had a brainwave. I'd just gotten an 1581 drive assembly (without drives) where it stated the drives were removed for use in the Amiga, so I thought...what about an Amiga drive? I was a bit reluctant to destroy an Amiga to get this working, but I thought try and see - I could always keep an eye open on ebay for a dead Amiga. Then it stuck me: The Atari ST reads and writes PC disks... Anyway, since I have a huge amount of crap, I of course have a dead Atari ST, so I removed the drive and plugged it it - BANG! works a treat! It seems to have all the jumpers the PC XT drives have as well, so if your ever after an old XT drive, try an atari one first - they're cheaper!