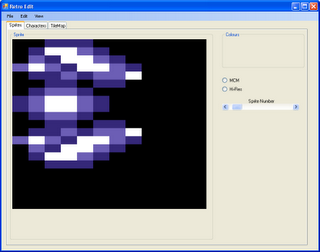 I've managed to get the Plus/4 sprites up and visible which is fine - fairly easy in C#, so next I'll need to get them scaling. I'll probably change a couple of bits internally so that I can have either 12x21 or 8x16 MCM sprites, this will let me view/edit either C64 or Plus/4 objects.

I released a new version of my assembler yesterday as well, I don't think very many folk use it, but I find it's really handy - particually the macro support which lets you do quite a lot.Turns out though that I don't test it nearly enough! One of the chaps on Lemon64 has managed to crash it a couple of times with ease. I guess without testers this kind of this will happen. Anyway, if you want to play with it you can grab it from my minus4 site.
Posted by Mike at 9:47 pm