I've been sitting watching scrubs again, and I just keep cracking up at it. Since Stargate's now been cancelled, its good theres still something on thats still worth watching!

I had to stay late at work tonight which wasn't bad.... I think thats the first time in the 2 1/2 years since I started! Russell and I are determined that we won't work the insane overtime that usually goes with being in the industry. I think once you have a family, it all changes, and you just don't care what the hell they'll say..... As long as the work quota is reasonable, and you make it - you shouldn't have to do overtime.... This doesn't seem to be the way the rest of the office is working..... They're gonna lose people over that.

I've been working with C# at home in preperation of Microsoft releasing the XNA stuff, so I've been building a games framework - and my understanding of what you can do! Its quite nice, very Java but without the pish java has to deal with. About the only issue was getting a timer to automatically update the window every 50th of a second. Its never gonna do Unreal3 on windows.... but it might on the 360!
Posted by Mike at 8:29 pm No comments:

So I did my bit at the EIEF (http://www.eief.co.uk/) and it seemed to go okay. I can never tell what Im actually like, I always think I sound like a total pratt. Still, this year, I'll be able to tell coz Channel 4 recorded it!! (audio only - thank you god!). You're only supposed to have 5 min to talk (which isn't a lot really), but I've no idea how long I went on for.

I met I knew someone from CodeOp's who was doing a talk on freelancing, and she was terrified! And you know, for a male dominated industry, I was the only guy on the panel. I suspect its male dominated in the ranks.... but its the women pulling the strings - as we all know they like to.....

Good fun though - I do enjoy public speaking, even if I do tend to waffle on a bit, and I can't wait to hear what I was actually like!
Posted by Mike at 11:18 am No comments:

I've spent the week updating my DMA Design site. It takes ages to get some of the material together for it, but I wanted to finish off the rewrite of the Lemmings page's. I also decided to put up a couple of pages from the next chapter (1991) since they were sitting around doing nothing as well.

I really need to start writting 1992 as well - before I forget it all! Once I hit 93-94, there should be a lot more people that can give some input and keep things fresh.... so far its just me. Anyway it's worth a read, even if it is to see just how badly I spell.

I'm in Edinburgh on Tuesday talking at one of the Edinburgh International Games Festival (EIGF) things. Its being held at the Odeon on Lothian Road at 11:15, so if your bored - come along....I suspect it's going to be a lot emptier this year. Last year, abo8ut 1/2 were kids with paretns - but schools are now back so....
Posted by Mike at 9:08 pm 1 comment:

So.... I'm doing a tool to build textures. Last time I did this I did it in C++ as usual but since I need to update it a bit, I thought I'd have a go doing it in C#. Now C# is pretty good in some cases, really easy to do GUI stuff - just like visual basic is, but still has some problems when dealing with memory. I had a bug that showed this up - I thought I had to make millions of textures, but it turns out that was wrong - obviously. But it did show up that C# was allocating twice the ammount of ram to do the job. Now, for 16 byte allocations, that wasn't bad, but if I was doing this in c++ I'd allocate a huge chunk of memory, and then just point to it. But in C#, you can't do that. "fixed" arrays actually have to be constant, which I don't want, which means you're buggered. This is pretty bad really for a "new" laungage.

Still, after I fixed the bug memory wasn't an issue so I was able to proceed as normal, and it's pretty good - in general. The other reason for trying this is that with Microsoft doing an open devkit for the PC and 360 in C#, these are the kinds of problems I might hit.

I'm really looking forward to using this new SDK (Software Development Kit) and being able to do little games on a 360 - perhaps even sell them....I just need to think of one - preferably one that won't take a year of my spare time to do! I've been doing several projects at home. One is a retro Commodore Plus/4 shoot-em-up (www.xeo3.org) and then theres my DMA History site (www.dmadesign.org), and then I have a few other smaller personal projects. Between all these - and family - I have almost no time to do "small games"....but I live in hope!
Posted by Mike at 11:12 am No comments: 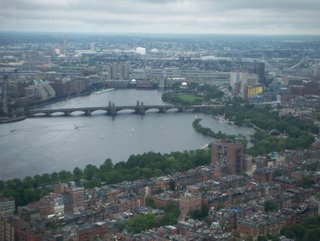 Been a while... whats new. I was in Boston for a week while attending a large graphics confrence (SigGraph) which was great fun. Boston's really nice, lots of green things, and very walkable - unlike most other US cities.

Sitting in a dark room for a week is a bit much, but at least we were able to get out and about in the evening.

Joe started school yesterday as well, and he was looking very grown up in his new school uniform - I'm feeling old now.... :(
Posted by Mike at 3:45 pm No comments: