Minus4: Profiling other games!! 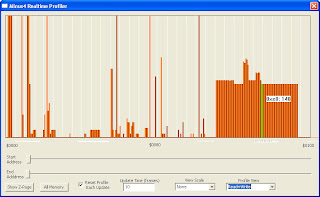 Now this gets really cool.... I was busy flicking though other peoples demos and games and its amazing what a basic profiler does. In Elite, you can clearly see where the linedraw (I assume) is called as theres a huge spike in the Execute map, while in Monty on the Run shown in this new image, you can clearly see that monty is rotated in Zeropage!!

72 bytes appear to be set aside for the monty graphic in zero page, and as you run about it goes up and down in time. Really cool.

It also shows up some odd patterns, for example in one of Luca's demos, it looks like he's using ZeroPage oddly as something is reading through zeropage overtime, and the read bar runs up smoothly through memory.

On XeO3, you can clearly see where both the sprites and scroll occur in memory, AND you can tell when its drawing tiles as theres a noticable spike every few frames.

The thing a static image can't get over, is that fact that becasue its in realtime, you see spikes as they happen - and where! Really neat.