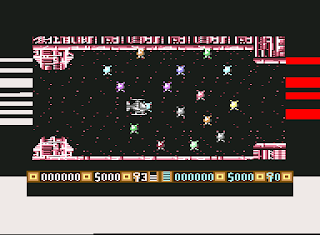 I was watching the timing bars on the IRQ's and had to again shake my head in appreciation of Dan's multiplexor, his trick of setting up a sprite if its already been displayed rather than kick off a new IRQ is top notch. I've added this to Blood money and you can see the result here. (Remmber I only multiplex 6 sprites, so theres more IRQ's needed than normal)

The bars on the LEFT are the old IRQ's, while the RED bars on the right are the new ones. You can see its almost halved the number and is happily packing them together thanks to about 6 lines of code. The multiplexor code is pretty slow really, and it was never unrolled, this means it has to keep track of VIC indexes etc. and thats not good. However, theres only 200 bytes free just now so I'd need to free up a lot more memory to be able to plug in the new one I've written for XeO3.

The saftly limit I've got in Blood Money is also 22 raster lines; thats the number of lines above where I kick off a new raster interrupt, while XeO3's magic number is 10! That means XeO3 can get sprites 12 scanlines closer than Blood Money which is a huge improvement.

Anyhow before I do anything major I need to free up memory... I think the front end takes up way too much, and all the fancy disolving characters (which was a fad at the time) also eats up space. Theres also lots of variables. I have space for 30 bullets here - and theres no difference between play and alien bullets! - so that should probably be cut down, and 12 character sprites which again I think could be reduced.

I also need to update the character sprite system as its not only slow, but embarrassing! The clipping is simply a loop to count how many chars are off screen, rather than just subtracting the thing! Stupid... Still I was young, I did that routine when I was 17 or 18!
Posted by Mike at 9:50 pm