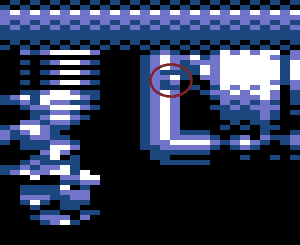 What a night! I've spent the remainder of the night trying out a solution to alien bullets. There are up to 8 alien bullets at any given time and all they do is pick one of four characters and poke it to the character map screen. Now while this is fast, it does mean that theres usualyl a big black box around them. However since we dropped the turret rubble we freed up 4 more characters so I though I'd try doing actual sprite bullets - well, masking them on at least. I expected them to look pretty, but ultimately be too slow to use. The result is shown in the circle opposite. Much nicer than the big black box.

I got a nice surprise, because while expensive, it wasn't unmanageable! Even with a whole heap flying around it only takes around 8-16 scanlines tops. This is great! What it means is that where we WANT lots of turrets, we'll simply cut down a little on the number of sprites to compensate; and where we want lots or sprite, cut down on the turrets. If we had both, it would probably be too hard anyway!

Good to hear that you got rid off those black boxes. Well, maybe they wouldn't have hurt too much with all that on screen action and no time to focus on them. Still, they were probably noticeable and I'd rather see it done properly :)

You are really taking giant steps these days. Who would have thought that some years ago? :)

This is much better, no more black box! High quality coding for de +4.

Yeah.... take a long time to get here, but with any luck, we won't have to wait that long now until its finished! We're on the other side of the hill rolling down!