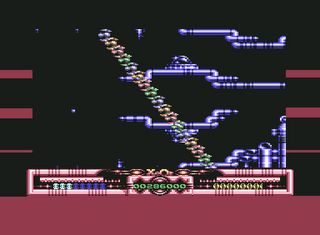 Well, the first version is done and although it still needs seriously optimised, it's in and working. I ended up using a slight hybrid between the one from Blood Money, and Dan's one from Armalyte. I loved the way he gathers sprites into blocks IF the hardware sprite your going to overwrite next has finished rendering, then it doesn't bother with a new IRQ, it just does it anyway! Very cool. I'll probably unroll the multiplexor IRQ and that'll help me get sprites closer to other ones. It looks like I'll have to redo a few paths from the Plus4 as they are a little close for the multiplexor (since they're 16x16 and not 24x21); theres an advantage to having software sprites... Still, it'll probably make the games a little different so you can have fun playing them both!

I'll probably try and get a C64 teaser done soon now, but I still have a couple of bugs to fix on it - and the sprites are still all actually only 16x16, even though its displaying 24x21! I might just "scale" them for now, just so they fill more of the screen.

Luca has also said he's not really interested in doing any changes for the C64 version - he's a Plus/4 man through and through, so nearer the time I'll be on the look out for a dedicated C64 artist to add some spit and polish.
Posted by Mike at 2:42 pm

It depends by project's overlapping.
If you wanna release both versions at the same time, you need a c64 graphician; if you wanna release +4 version first, targeting all the effort for that, and AFTER IT the c64 one, targeting blablabla, I could be your man.
The fact is that C64 version has born in a week, the +4 version in about 6 years, and I think that one of the two version needs to have a dedicated full time...

lol.... The Plus/4 one is still the lead. I only managed to do the C64 one in a week BECAUSE of the Plus/4 version. All the scrolling, paths, collisions etc. had already been done - not to mention all the graphics.

Nah... C64 for the moment is just a play thing, Plus/4 one is first, then after that, I should manage a reasonably quick port to the C64. However, like I said... I'll need to get a c64 graphics guy at that point to help finish it off. This isn't a huge concern just now.

I repeat myself: if not overlapping in times, I wish to be first listed for the c64 gfx.
A note: a c64 version could have pixel perfect collision, and that globally changes the choices about levelmap and graphics, with new possibilities, like non-boxed piece of background (diagonal, curves, no need to "fill the box").