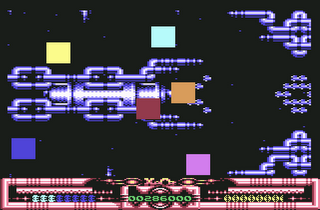 Well, in only 2 days, I've done the main part of the port to the C64! Although there are no sprite graphics yet, and no multiplexor, its running through the game and its paths. Alien Bullets are off a bit for some reason, but that should be an easy one, unfortunately because the Plus/4 one has been designed to run in 2 frames, the C64 one runs a bit quick. I can slow it down to 2 frames as well, but I'm not sure I want to yet. Past experiance says that when you're PLAYING the game, you dont notice, and 2 frames gives you a lot of free time to do cool things. Because of Hardware Sprites, I can however move the players ship every frame, which will help make it seem like's going quicker than it is... I could also scroll the screen by 1 pixel a frame as well, but I dont think thats gonna work becasue sprites that are supposed to be attached to the background will judder - I think.