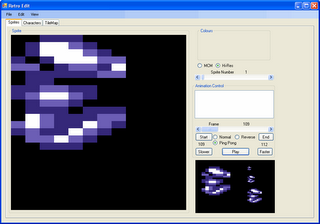 After talking to Luca, I feel somewhat ashamed. He described the process he uses for creating sprites and it was so bad, I was virtually blushing. I am now even more amazed at the superb animations he's manahed to create despite the terrible tools he's using. So, I've vowed to correct this as fast as I can. To this end, I've changed the focus of the editor, it really will now become a Jack of all trades. I'll do +4 sprite editing first, then add C64 editing so that I can get those streachy sprites, and then onto character and tile map editing and so on.

However,m before anyof that, I need to get Luca some tools he not only could use, but really wants to use. The problem with any developer is that we get so used to using our old tools that we just don't want to change, so I need to give him a tool that feels like his old slippers, buthas a whole new set of features that empower him.

The first on the list was loading in the current sprites and then being able to play back certain animations in various modes. This is now done. He can now scroll through the whole set, pick start and end frames, then play them back forward, backwards and in "pingpong" mode (where it bounces back and forth). This should at least allow him easier viewing until I can actually get editing and saving in place.

In the future, I think a realtime linkup with an actual machine would be very cool, as the anim plays on the PC, it also plays on your Plus/4 or C64 on the Tv... also theres no reason why when you plot a pixel on the PC you dont SEE that on the actual machine as well. I wonder how many people would use that......
Posted by Mike at 8:47 pm

I would :) I really like the thought of being able to see the results on the real machine at the same time. Even if you know what to expect... sometimes PC monitor and plus/4 display look surprisingly different.

So what is Luca using to create the animations right now? Luca, if you read this: Maybe you can describe your work flow in a few lines.

I always liked the "Graphic Designer" (or "Grafik Designer" in the Kingsoft flavor), which is far from perfect but quite useable.

P.S.
I just examined the screen shot. Looks promising :) Back then, I added a routine to "Graphic Designer" which would let me watch the "sprite"/animation on a black screen, without anything distracting around. Have you included something like that? It helps evaluating an animation a lot.
Also you might add a fake scanline preview (every other line black), I think this comes sometimes closer to the original than those PAL simulations and it's easy to do.

The previews on the right of the large image animage and are surrounded by the current +4/C64 background colour. It should be enough, but if its not, I can add somesort of other preview.

I have a debug stub on the Plus4 that I wrote for my remote debugger, so i can probably use that to control the Plus4 and display graphics directly if I need to. With a parallel cable, I can easily make the C64 do the same. Spectrum might be harder ;)

I'm not a big have of those "PAL" display modes... they always seem to lose something... same with the scanline thing. If it was needed, Id much rather save a .PRG foir you to run!

Sprites are a little bunch of pixels, and the only thing you really need to draw animations is keys 1/2/3/0 to put coloured fatty pixel when you need :)

That's the reason why I use Moldi's LogoEditor V2.0: easy to use, with some useful options like mirroring, copy/paste, shifting and so on. It's a free space to test all the stupid errors you wanna try.
The terrible moment comes later, when you have to sort in the right way you chars in order to keep the correct format:
02
13
and I do this manually, with all the thrilling you can imagine.

Animation? Oh well, a 5 minutes coding with a little table to be read is enough, and you can open so many YAPE windows: one for drawing, one for animating... :)

It would be a great tool! Mike, just go ahead and do it... :) there was a discussion on csdb not long ago about this kind of "universal editor". So far no good solution exist. And it would help others to make something, including me :)