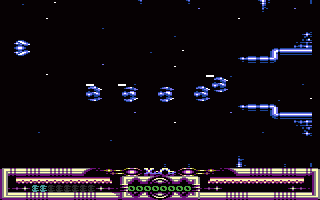 So... I finally found some time and energy to boot up the project again, and low and behold - another bug. If you look at the image you'll see the litte white lines above some of the sprites, this I think is due to the first or last sprite not being setup correctly, but Im having a little trouble pining down as to why. This is running with only 3 cache entrys, which is pretty cool really as it means its using virtually no memory (saving 10k!), but it does slow down a lot when the screen gets busy and the cache is emptied on a regular basis.

Once I fix this, I think that'll be all the bugs out of it, and I can once again start on the weapons system.If you recall, I did start on that before, but it went slightly pair-shapped, and I had no idea why so I had to undo it all and hope to start again fresh later.