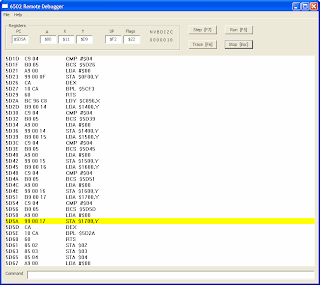 I've decided to continue my remote debugger I started ages ago with the view to gettting it up and running on the Plus4 and C64. I had to look around to try and find the source to the bugger but I eventually found it and was shocked to discover that it was in C++ and not in C#; bugger. This means I'll now have to rewrite most of it so that I can get it into a much easier to maintain format. Bugger.

That aside, I have also been looking at the actual debug stub on the plus4 side and its a bit ugly to say the least. I've decided to get it into a much simpler form so that its easy to get into a game. This involves jumping through a coulple of hoops but I've now (mostly) got it running inside XeO3. All I now need to add is a call at the very start of an interrupt routine to the debug stub and it handles the rest. Theres currently a problem with tracing as it doesn't appear to keep registers in sync but I can stop/start the game and try and single step. The image here shows what happens when I click the STOP button. Now once I rewrite all this stuff into C# I'll add symbols etc. so that its easier to use, then I'll try and get it working on the C64.

This may seem like a bit of a departure but theres a couple of very good reasons. First when coding the MMC file loader it was a NIGHTMARE to debug as no emulator current emulates the MMC hardware (pitty), and means that writing code for real hardware becomes much simpler. Secondly it means I can extend it and actually debug SuperCPU code which nothing emulates currently. This is another major advantage and again helps speed up development hugely. I've lost count of the time I've lost because all I could do was change the border colour, or print a hex number when things go wrong,

Now this is likely to take some time to write (and port) but I expect it to be time well spent, and I'll then release the debugger and debug stub to everyone else. For the time being I'll carry on using the user port (since it allows you to program the SCPU or MMC etc.) but at somepoint I will try and allow the RR-NET as well in case you want to debug code for the user port! As a little side note.... If I can create a Plus4 ClockPort, it means I could use the RRNET on that as well, and that would let me do an MMC card on the USER PORT, which is so simple its not funny! Since the Plus4 has ROM space internally, you could supply a userport MMC card and a ROM for all basic functionality without any real problems!