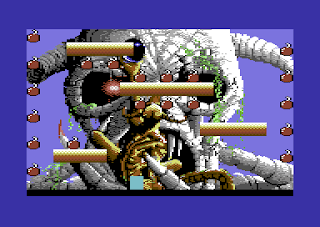 I've now finished the sample app that I was doing for the frame work; well, as much as I intend to. As you can see its a platformer in bitmap mode, and you run around collecting the bombs. Its basically a simple version of the first level in bomb jack (without the baddies). It uses the built in player-2-sprite collision routine as Ive been lazy and done the bombs as sprites, but it does help to show how to use the framework better. Also remember that I've only really spent a couple of days on the sample, so dont expect too much.

I've done it in bitmap mode because platformers should never really be restricted by character count or colours, so having a full bitmap is nice. It also let me have a pretty background, although it turned out to be harder than I thought at the time. I had to rip the bitmap off an old Ballistix floppy and then I discovered that I had stored it compressed! So I then had to rip the decompression code from Ballistix into the sample. Still it was only byte run so it was easy enough.

Anyway, with this done, I now only need to clean both up, write some very basic doc's and then upload it somewhere. Perhaps someone will even finish the platformer sample... who knows... It would be cool if you did a built in MMC loader and you could load each levels bitmap from an MMC card really quickly. I think any games you do these days should take advantage of new tech that everyone's buying, and that in turn would help sell more and move things along. If nothing uses a new bit of hardware, no one will buy it!

Last chance for anything to be added though. I can't think of anything, but feel free to suggest. I'm not sure when this will get released, but I dont expect it to be long now. Hope you all enjoy it, or at the very least have fun looking though the source...
Posted by Mike at 8:44 pm