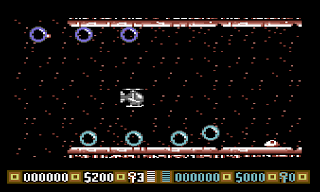 I've been playing with trying to get my old Blood Money source to recompile off and on for a while now, and its finally rebuilding and running! Well, more or less. It still has some issues to be sure; character sprites appear to be killing it stone dead, and if I switch them off, I get a little further than then the game dies.

It's good to see it actually building and running though. One thing thats always bugged my was the crappy starfield I had on level 1 and I'd love to take some time and tune it up a bit. I'd also love to make a proper MMC64 version, one that loads directly from an MMC card - which would be cool.

Theres lots of things I did wrong back then. Shops weren't part of the background but drawn, as were turrets. Pretty stupid really as the only follow the screen - something the background map does pretty well without any extra CPU time. I'd also take away the 2 player mode and give that extra sprite over to the multiplexor. (Although.... a 2 player internet version would be interesting!) Theres a few areas where things glitch, and it would be nice to smooth that out. Talking of multiplexors, I would love to replace the one there and put my new one in as the IRQ is about twice the speed (I think).

I've also sped up the Character sprites a bit, and mu multiply routine (used for all the circle paths) is also about twice the speed. I suspect I could get it under 2 frames easily enough. Yes, believe it or not Blood money ran in 3 frames, with the main player ship running in the vertical blank.

So yes... theres lots of things I'd like to take a crack at fixing, although its gonna be tough as memory is down to a few bytes left! I've no idea how many sprites I used, but while I was aiming to get them all in, I think a redux-version could lose a bit to save memory. They were stored compressed then blitted down when needed. I might be able to speed that up or remove it completely.

Oh.... and get rid of that stupid front end screen....its pathetic... Not to mention the flickery raster on the game.

And don't worry.... I'm not setting aside XeO3 to do this, it's a project I'm doing in the background as I always wanted a console version of Blood Money, with nice dual playfields etc. and this is the first step.
Posted by Mike at 12:09 pm

Great to see you reviving your old code :)

Yeah, as a bit too hard, and I didnt realise how long each level was! It goes on forever! (And they're shorted than the Amiga one as well...)