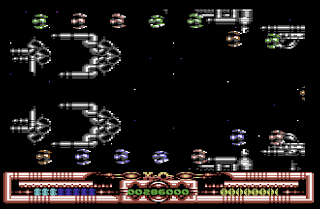 I've been making pretty good progress last couple of days... As it was my Birthday on Friday I took the day off and did quite a bit of retro coding, and I've managed to progress even further today! The C64 version now runs through the whole demo level with aliens and bullets flying around just like the Plus/4 version, and while the C64 version is smoother, they are very similar when you watch them side-by-side.

I've been busy tracking down a bug in the multiplexor, but it turns out I simply wasn't clipping the sprites once they went below the panel. This was causing a new interrupt to be generated in the middle of the panel causing some nasty flicker. That solved, there does still seem to be an issue somewhere, but I'll leave it for now as its not that important.

I also found a bug in the Alien Bullets where they were being clipped too early, so fixed this in both the C64 and Plus4 versions.

I did hope to be able to make a single source set that would compile for both, but theres many very small changes all over the place, so this now looks unlikely - but I'll wait and see nearer the time.

I'm also wondering if doing this demo is the right thing... it actually looks pretty good, and would be a valid "level1", but I guess the whole point was to release a level I could tweak then start again so that people would get a full proper game to play without having seen/played small sections so I'll carry on for now as planned.

The extra sprites on the C64 version are proving a boon as I can extend wave's a little and make them link a little better with the next wave coming, losing some dead space while I go - all in all, its progressing pretty well now.

And just a reminder when you look at the C64 screen shots; these are all using 16x16 sprites (or 8x16 if your a puirest!), so the final C64 game will look fuller as the sprites will simply be bigger! The player ship will probably reamain 16x16 so that we can keep the smaller gaps and passageways.
Posted by Mike at 4:25 pm