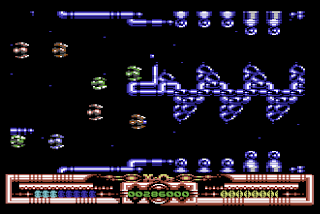 I've managed to get the bullets working on the C64 now, in much the same way as the Plus/4 version. So while its masked onto the screen, its no smoother really. However, because of this though it means I have to double buffer the character set as well now - pooh. Im not sure if its worth it though...I could do 8 proper masked sprites (8, 8x8 pixel sprites) which would allows bullets to move better... but I'd rather spend the CPU time elsewhere.

On the plus side though, its much smoother than the Plus/4 version thanks to its hardware sprites and theres plenty of CPU time AND memory left!

I need to get the player working next so that I can actually play it, then it would be only missing the front end. In the end, the C64 version will be better but thats to be expected... but I do hope that they are so different that you'll enjoy playing them both!
Posted by Mike at 8:16 pm