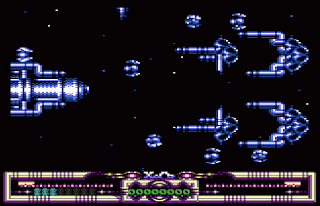 I'm slowly progressing with the alien waves for the demo level and I think it's going okay. If I play without wanting to power up, you can more or less run through without getting hit (so far). But if I get greedy and want all the coins, then it starts to get tricky; which is the idea.

I've mapped out about one third of the level, although I've extended the start a little to make the introduction a little simpler - mainly so theres no backgrounds while you get used to moving around.

I also fixed the 2nd bug in my list from yesterday, where the collision radius wasn't being used.

So.... the demo is progressing slowly. Slow but steady! which is of course better than it has been; stopped and dead.
Posted by Mike at 9:29 pm

object design looks neat - I like that metal shiny style from those old days as your screenshots uncovers.

I must say I'm also looking forwards to getting my hands on something playable. The game certainly looks about as good as I'd imagine a plus-4 action game can do, not that you've got much in the way of competition but then I suppose that's sort of point..

I just recently resurrected my own C64 shooter project actually (remember me?) and thought to check on your progress. Personally I find the trick to getting back into a project like this again is to find some shiny new technical feature to implement (the topic of multiplexer sorting came up on CSDB and I just *had* to prove that a radix sort was feasible.)
Of course it would help if I could also interest the guy who drew what little graphics I have in making some more.

Anyway lets hope we can both find the time and motivation to finish our Commodore projects! Not very likely in my case of course but you never know ;)