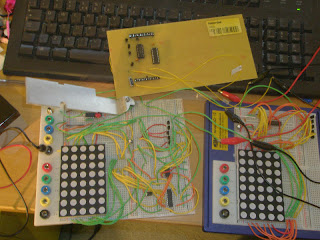 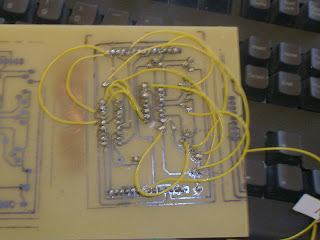 I've been playing with electronics stuff again. Just before stopping for the Christmas break, Russ was moaning that I still hadn't finished my big scrolly message board, so I thought I'd have a crack at making a real life board using some some printable solder mask I got a while back. It took me a while to get things right (and I had to go and buy a cheap disposable Iron for it too), and the nerve to break out the chemical solution for the copper board, but once all that was done, I mananed to get a reasonable 1st attempt at a board. 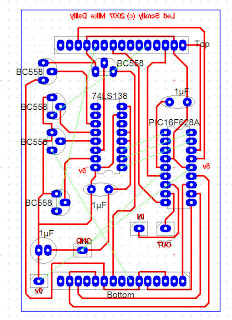 It's taken a little bit of time to get it all working, as I'd made a right hash of some of it, so I had to cut some tracks and solder in wires to bypass mistakes. However, its working now, so in theory, I could now think about sending off to get real boards made!

I still need to work on the master PIC side, along with the PC comms. The idea is I'd use a TCP/IP or UDP interface (perhaps even wireless) and allow simple bitmaps to be sent. The mastr pic would then send this to the correct module.

I do have the basics working just not the PC comms side. The image on the right is the finished (one sided) PCB, and as you can see it still has quite a few jumpre wires. I dont want to make double sided boards at home, way too hard. If I ever get my milling machine, then I might give that a go - in fact I simply expect that to work.

Still, its nice seeing the actual PCB in all its glory, and I may end up making a board that can hold 3 modules just to see what it looks like!

One thing I would say, is that with the software Im using just now, it really doesn't route very well, and I do end up putting a lot in by hand. It could just be because this is a cheap bit of software.... I dont know.
Posted by Mike at 9:00 pm