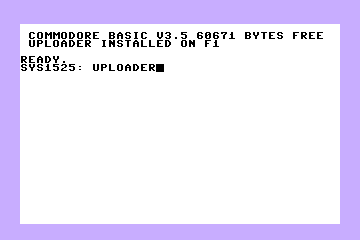 I've having a bit of fun making my first ROM for the Plus/4, nothing too amazing but getting used to developing and burning ROM's for it. I've put my uploader onto ROM so that I don't have to load it from disk anymore and for a first attempt, its almost there. I altered minus4w so that I can autoload a ROM as well as a program so that I can test it better; although being an uploader, I can only test it so far inside an emulator!
I removed the 3-plus-1 ROM's from my development machine and put in an 8K EPROM (the slot's designed for 16K eproms, but 8K works just fine), and I now get the screen shown. I pinched the start-up code from the 3-plus-1 ROM's as its pretty handy, and I'll release it as source later on. Using this stuff, I could build a complete debug system on ROM meaning I leave virtually all the RAM for a game/application, which would be very cool.
I was also thinking about XeO3 and wondering if I could put it on a ROM, and I could...but it would be a little odd. I suspect that I'd need more than the available ROM slots left, so I'd need to have a cartridge and a connector from that into the userport so that I can expose a couple more control lines and page more ROM's in/out (probably allowing up to a 512k ROM), but that would mean that I could do a version of XeO3 completely ROM driven - no loading times! How cool would that be!
I also still want to try and make an MMC interface at somepoint and have a ROM bootup and load a basic filemanager fom the MMC card. This again means that there would be basic loading on ROM and you could put games etc. on an MMC rather than ROM/DISK. However, since this would take over the expansion port, you really need a SID card on there as well....bummer. The SID interface doesn't look too hard though, so you never know.
Anyways....I'll release all this stuff as soon as it's in a fit state - getting tools on ROM is pretty neat, particually since the Plus/4 has 2 available ROM slots internally - which I do really like.
Posted by Mike at 12:15 pm