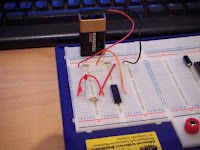 I've been having fun with my electronics toys again - sorry. :) A whole load of stuff arrived so I've been playing away with PIC's and LED's. I'm planing to build a scrolling message using giant LED Matrix disaplays (5x8's) so I've been learning PIC assembler. You can code a PIC in basic and C, but while the assembler is a little odd, its still far more flexible than either language.

While learning PIC assembly, I've managed to kill 3 pics in the process - doh. I'd originally read that there were 16 availble I/O pins on the PIC I'm using, however, thats not really true; theres 15 I/O lines and 1 input line. However after setting this input line to output, I've discovered that I can't reprogram them. Oh well, just as well they're cheap! a PIC16F628A is only around £1 a chip so its not the end of the world, but I'm glad I figured it out quickly!! 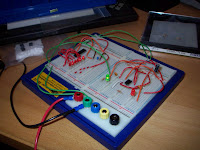 I've now progressed past the little pic+flashing LED onto something a bit more interesting, I've started to play with interrupts and generating them via an external PIN which I'll use to do some interrupt driven COM's. The PC will send data over a couple of wires, although I might look into the USART's every PIC seems to have. The picture opposite has a PIC16F628A driving some LEDs and a 555 Timer generating an external interrupt pulse. Great fun.

It seems to take quite a while to do even the most basic stuff in electronics, something I'd never fully appricated before - particually since you end up checking and double checking EVERYTHING! However, its great fun, and I'm looking forward to building some real toys for my Plus/4 and C64. I just got a batch of C64 carts and EPROMs and I'm waiting for my new EPROM programmer which means I'll be able to put my C64 uploader on EPROM so I don't have to load it each time, that'll be very cool. I'm also waiting for some 8bit baby's so I can try and do some Plus/4 stuff, althought the Plus/4 has a couple of EPROM sockets inside the machine and that may let me do the same on that machine too - very cool.

Oh....and I also had never realised just how much NOISE will appear on a wire that is simply waving around in the air! Its amazing! It doesn't stay at 0 volts, or"X" volts...but jumps up and down like a yo-yo! Also, if I did get it sitting still at 0 Volts, as I moved my had towars it, it starts to get electrically charged - even though I never touch it! Thats just so cool....
Posted by Mike at 4:32 pm