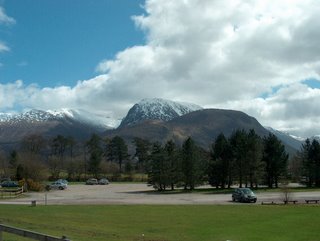 We had a drive yesterday up to Fort William since the weather was finally improving and there wasn't a chance of getting caught up in a blizzard. The road up was fairly bland; well, compared to the road back that is. Fort William is a nice enough place, very pretty but pretty empty for a day out. If you're staying there then you theres lots to do in terms of walks, and water sports. BenNevis is impressive I guess, but the road back down between the three sisters and Glencoe has to be the most impressive countryside I've ever seen. It's almosy like an alien landscape, and theres virtually no sense of scale. You look up at these huge mountains, and only when you spot someone climbing them do you truly start to get how big they are. The problem with BenNevis itself, is that its really just a bump; theres nothing spectacular about it except its size. These otheres are amazing though, and since you drive right at the base of them, its breathtaking.

I've been busy playing with templates and STL today and it's starting to come together I guess. It's a bit strange and I know that it's going to take time to actually use correctly, but I guess I'll manage okay. I did dig a little deeper into the STL stuff, and didn't like it. I don't mind the interface and all the rest but I don't like the complexity of the STL library. Even in release mode it generates a lot of code, much of it I think unnessasary by most coders and the features it adds I dont think should be up to STL but the programmer to wrap it.
Still, it must be said, for the average programmer doing normal sized programs STL is fine, and easy to use. However, I worry about using STL and large programs, the memory footprint and fragmentaion isn't very good and the ammount of code bloat with many unique classes can be nasty, particually when used with other templates.
Posted by Mike at 7:51 pm