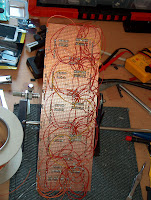 I'm still slowly progressing with wiring up the prototype, and I thought I was getting on well until I decided to finish one of them off - just to see how much more I had to do, and it turns out; LOADS! Oh well.... Onwards and upwards and all that.

I've been coding up a demo for Luca's new competition, and Im struggling a bit to fit it in. The original size was supposed to be 64 bytes(!) so I started working on that only to find out they had increased it to 128! DOH! Oh well.... Its nothing special, but I do prefer these smaller demos to the larger ones as you dont have to do very much, and it doesnt have to look too pretty.

I've also been speaking to Luca about the level2 on XeO3, so I may pick that up again soon. But once again, I've left it in a horrible state! Its got a pretty serious bug in there somewhere (probably the new sprite cache) which causes the whole thing o slowly get corrupted and crash. Bugger.
Posted by Mike at 2:07 pm