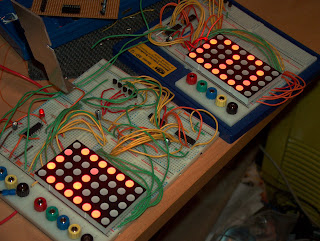 Yep! At long last (although to be fair, I dont work on it ALL the time!) I've figured out what was wrong. My theory about it overheating appears to be correct since I've attached a heatsink (pinched from an old ZX Spectrum!) and its now been running for around 10 minutes without a problem. The heat sink is hot, but not too hot to touch (perhaps a new modern one will work better), and now I can finally work on the slave to slave forwarding of the message packets!

The idea behind this is that the master will send a packet with a unit number attached (say 5), and each unit it goes to will check it, and if its not 0, decrement it and send it on. This means theres no unit "allocation" or built in ID, and they are all then addressable. The only thing Im not sure about is just how fast this will be when there are 64 units all chained together... whats that going to look like? I intend on pinching a game developement trick for this and doublebuffer the display so that every unit will get its packet, and then a "flip" will be sent to them all via a single line which they are all attached to. This should solve any ripple which might occur. The other thing which may work is to send them, last unit first. Since each forwards the last packet on, it would mean they would all get the packets almost at the same time.... I'll try this before I solder a "FLIP" commandline.
Posted by Mike at 7:48 pm