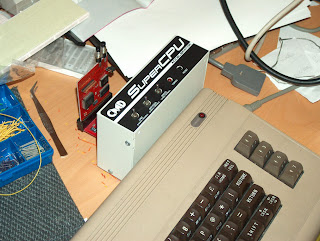 How cool is this!! I finally managed to get hold of a SuperCPU from ebay! Man I just LOVE ebay! (I also spend WAAAAAY too much there - oh well). So, got the super CPU, plugged it in and tried a few programs, wow does it fly! I loaded up Driller which was always painful, and now it plays like an arcade game! very cool. I also loaded up Mercenary, and its an amazing piece of work. It actually smooths out which its switched on. Doesn't just run quick, but you appear to get smoother gameplay! Looks really really cool.

I then loaded up my download program and squirted down XeO3 (which downloaded in like 1.5 seconds!) and played with switching it on/off. wow... you'd have SOOO much time to waste with one of these. I'd be tempted to write a game which uses the bitmap but blits it on and then does stuff to it that you could never do with a C64 - like 3D baddies or something. I was looking at Metal Dust, and aside from a couple of the parallax effects, you could actually get that running on a stock C64 (pretty much). But 3D baddies...Now that would be cool.

The extra RAM would also be very handy for games. I have 16Mb here, but I hear the normal is 4Mb. Even that is a huge amount. You could pre-cache and pre-rotate everything - AND run a multiplexor. Which would allow you to have all the normal hardware sprites AND loads of software ones AND possibly some 3D effects. I think Metal Dust missed the mark a little - although I'd like to have a play with it, but I refuse to pay 30Euros for it, thats just way too much for something I'd never play.

....especially as I've just gotten a Wii!!! How cool is THAT! We're all hooked on wii sports, not to mention getting heaps of excersise into the bargan. I've also been playing Crackdown (which we did at Realtime Worlds - well, I say we...but I haven't been involved in it at all), and its fab as well. I love the building jumping stuff, great fun - as are the cars and trucks. Its a much better playground than GTA ever was.

I've just recieved a stack on transisters so Im going to try hooking up my LED displays with them rather than pull-up resistors. This should allow me to use the 40xx chip I got without anything else. I discovered that the larger pic I bought REQUIRES an external clock crystal, which would bump the price up even more. We did think about having an external clock pulse and feeding that in, but it still means even more expense. So I currently think I should just use the old way and try out the PNP's I have to see if that'll do the trick.

As Im off for a couple of days, I hope to try this out soon, then I can progress with the 5 unit prototype I was making....
Posted by Mike at 9:21 pm

Hello Mike. We'll be meeting up in Yorkshire again sometime soon, and yet again on the agenda will be SuperCPU gaming and programs, so if you want to join us, drop us an email via my MySpace page @ http://uk.myspace.com/shaun_bebbington - thanks :-)

Well, work and family just dont allow me to endulge in this kind of thing.... Pitty.