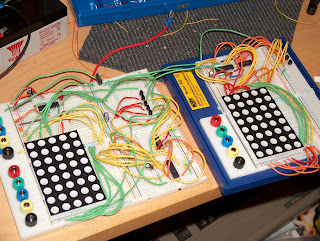 I've built another module so that I can work on the communications between them. The idea being that the master PIC sends a packet along the serial wire and the 1st module picks it up, decrements the PIC number and if its not 0, sends it on. This allows me to add mode modules later, and keeps the whole thing really simple.

However, Im still having issues with it freezing up. But I'm getting more convinced that its the power supply - even though I have very little evidence to support it. The battery Im using is a 12V, 1.2Ah rechargable battery, and when I switch it on, it gives a very bright image. However, after a little while the whole thing starts to go funny. The Master PIC LED is still lit, but the scrolling stutters, stalls and then freezes on the LED Matrix. However the fact its still being displayed tells me that its running okay. I put in a power on sequence so I'd know if it had reset, and its not.

Now this tells me that either the power to the master PIC isn't holding (which should affect the rest of it), or the serial comms is losing sync somehow - but I cant think of any way to test that.

On a more positive note, I did fix the ghosting! I altered the order of PORTA and PORTB being set, and that seems to have cured it. I suspect the Transistors were not slow, but too quick, and showed the slight delay the PIC has when setting the data. Theres still a slighly glow, but because of the ways its now set, theres not much to see.
Posted by Mike at 9:49 pm

I started reading this blog 'coz I'm interested in games programming. Those parts with Xeo3 were really great, but I'm not interested in these ICs, wires, LEDs and so on. I'll visit back in a few weeks, maybe we can read Xeo3 news again. Anyway GL in building those things.

Well, these pages simply show my doing my hobbies, and XeO3 is just one of many. I'll get back to it soon enough I suspect. :)