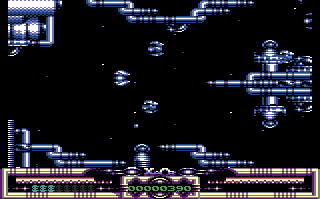 So, I thought I'd post some stuff I'm doing in my spare time. I'm currently writing a retro game called XeO3 (surprise surprise) which can be found at XeO3.org. This little game started life some 6 years or so ago in an effort to make a comunity sprite routine of all things. The problem with the Plus/4 is that unlike its big brother the C64, it has no hardware sprites, and unlike the Spectrum, software sprites are a nightmare to write due to its character map screen. So, I decided to try and apply some modern methods to this old problem and then release it out to the comunity so that there was a chance that some new games might get done - something beyond the simple ones that were currently being written.

I was getting on fairly well and had a few sprites running around so I started to think of a simple game to show it all off. I had suggested doing a breakout clone since it wouldn't take me very long but the community wanted more... much more. So, I then suggested a shoot-em-up since the plus/4 didnt have any good ones due to the lack of real sprites. In fact, whenever there were some real sprites, there was usually only a couple of baddies, and a very small play area. And so it began, and the long process of doing an old style game got underway.

Now, due to work and family (and boredom) limitations, it doesn't get worked on very often, and so has taken a long, long....LONG time. But its now getting to the point where real progress is being made, and its looking pretty good. The technology behind it is also pushing out what people thought the plus/4 was capable of as well which is good.

So, from here on.... I'll start to describe what Im doing to it.... The graphics/music/gameplay are documented via the main XeO3 blog, but I'll document the programming stuff here. Hope its of interest.
Posted by Mike at 11:17 am