Z8410 DMA chip for the ZX Spectrum Next

So the ZX Spectrum Next team have added a Z80 DMA chip, the Z8410  chip to be more precise. This was popular add on in Europe ( more info here: http://velesoft.speccy.cz/data-gear.htm ), and has some very cool advantages for future games, especially because it's now a standard part. However information on it is a little thin on the ground, so after some major googling, I've found the info on them.

The registers are below, and here is the Datasheet 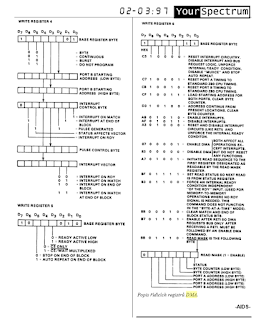 Hi
Thank you for interesting stuff here.
I'm playing a bit with DMA (using ZXBasic + NextBuild). Is there a possibility to use transfer method which takes into account a transparent color?
Kind regards,
Michal

Now that the Next is getting close to completion, I'm warming up my old Spectrum programming skills - thanks for all the information and code examples you are providing here and in the CSpect package! This is very cool.