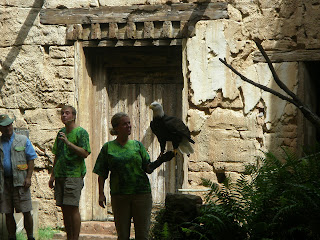 I'm currently in orlando having a family break, it's long over due really but I'm loving it!We had a great flight over as the plane had TVs in the back of the seats, so you could pick your own films or TV programs. It also had some good games to play, so Rebecca and I had great fun - I didn't even get my laptop out I was having so much fun!

It's been raining a bit here, usually for about 1/2 hour a day, and it's incredibly heavy (as usual), but because of that, it's not getting as hot as it can get which is great!

We've actually spent more time in walmart than anywhere else just about! The misses is loving it! We spent most of yesterday in the Animal Kingdom and eventually had to leave cause the rain was so heavy we were soaked through. Our clothes dried pretty easily, but our socks/shoes were soaked. I also appear to have killed my iPod, as my bag got soaked through, and the screen is full of watter - bugger.... I'm trying to let it dry out before trying it, but iPods never really switch off so I'm not hopefull. *sniff*
Posted by Mike at 12:23 pm