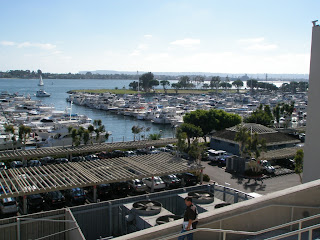 So, day 4..... one more to go. I now remember why we were itching to get home last year; its hard going. Until you've actually done something like this, you don't realise how hard it is to sit in a dark room for 5 days straight sitting listening to folk waffle on. Still, theres some good stuff being said, and I hope we get a chance to use some of it when we get back. Russ has been doing XeO3 stuff while sitting listening, but I find it pretty hard to code on the laptop, particually doing paths - which is what I have to do next.

I guess I could start to flesh out the front end a little and do the high scores and saving to disk etc., but I'd rather start doing the gameplay beta and start to get feedback on difficulty. I think thats the next big step for us - something playable and getting some feedback on how hard people think it is, that would help make the final one that bit better.

Still, I find it hard to think about this stuff while listening to guys go on about high end rendering on PC's and in movies. Oh well....I'll be back home on Saturday, so I can carry on with my own projects rather than vegging out over here.

The only good thing about being here is occasionally getting to shopping mall's.... but you dont really get a chance to do that very often.
Posted by Mike at 9:26 pm