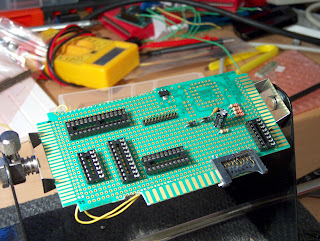 So here we go again....I've started the SD/MMC+Clockport interface. While it should be fairly simple, I've not connected a clockport before, and I need to decode the lines pretty much down to the byte this time; for both the clock port and the MMC interface. This means the board is pretty full so I won't be able to add the RAM to this test one,but if I was making a proper board, theres nothing saying I couldn't do it on that. While I couldn't see any real use for a RAM only interface, this one I can (with or without the extra RAM). Having an MMC card slot and a clockport on a card would be pretty cool, and allow all manner of C64 apps to be ported, along with allowing the +4 onto the Net - or simply better comms to the PC. But best of all really is that anything that someone makes for the C64's Clockport, would be usable on the Plus4 (with a little relocation - something +4 guys are pretty good at!). 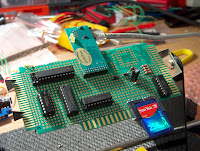 Of course, if I added some RAM (128k,256k or 512k extra) it would mean that any clockport applications (like a TCP/IP stack or game) could make use of it, since you'd know everyone else running it would have the extra RAM as well. The only thing that worries me is the physical size of the interface. The C64 one is full of surface mount stuff - professionally done, but I guess this wouldn't be....

Oh well... first things first - lets get a working prototype and then worry about the rest of it!


Edit: Oh! And the little voltage regulator at the top, was just to see if I could solder one on without making a complete hash of it!
Posted by Mike at 8:29 pm