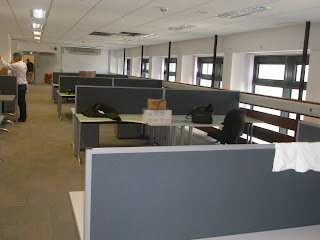 So here we are, the start of a new job, a new office and everyone raring to go. With only 4 of us there initially, it felt like a large space to fill, but it was cheap, and we had room to expand.

When we started, GameMaker 8.0 had just been released, and we weren't really looking to touch the IDE or windows platform at all, our sights were firmly fixed on getting games onto consoles - something we still really want to push, but has never managed to happen fully for us.

Russell also suddenly got pulled onto GM4Mac, as the guy that was writing it, slowed down to a crawl, and Sandy had been desperate to get it out the door for years now. With Russell now pushing it full-time as well, this was now suddenly a distinct possibility.

We finally made good progress on the PSP with our first game Green Tech by David Galindo was heading into the dreaded Sony submission process. This wasn't something any of us were looking forward to. Then something else happened.... Sandy suddenly wondered if it would be possible to get games onto the iPhone/iPods. The Apple app store had started to take off, and he was wondering if the runner would work okay on these new touch devices. He brought up his iMac got us an iPad, and I set about doing the first port, and inside a month I had the initial version running pretty well.


Come September, and we showed off this new work in progress, and set the a benchmark for new ports - around a month for the core of the work, and then a few weeks for all the frills. While over the years as new features go in, this now takes a little longer, it's still a fairly quick process compared to many other platforms.
Since it had been one of our test games for a long time, we felt it only fair to let Chad Chisholm's Sky Diver be our first iOS game, and so we got Geoff Gunning to spruce up the look and feel of it, and submitted it to Apple.

This was definitely one that made us nervous, Apple had just announced new rules for apps, and that games had to be written in C++/Objective C. Now the runner obviously was, but the games were script, and so we weren't sure how they were going to view these games. We knew that this was mainly targeted at Adobe's Flash, but it could have an aftershock that hit lots of other games. The first time, the game failed submission - not a big surprise for our first game through, but the only mistake was an icon or something, nothing major. It passed on the second attempt, and GameMaker's first cross platform game went live.

During the port of Skydiver, Realtime worlds had gone pop. The excessive spending, bad planning, and the refusal to let anything else out the door before APB hit them where it hurt. The whole My World team was let go, and the APB guys were sorry to see it, but were living in a little dream world, sure it wasn't going to happen to them, when a month or so later - it did. The whole company folded, and suddenly there were around 300 coders, artists, designers and testers out looking for work. Stuart Poole a producer on My World came in to see if we could use his skills, and it didn't take long for him to make himself useful, he helped push Skydiver through production and submission and came in full time shortly there after.

We started looking for another game, and this time pick Andrews "Maddening" game. It was different, looked nice, was pretty good fun, and actually a pretty small game meaning we could port it quickly. We did have to help Andrew optimise it quite a bit, as the rendering  wasn't great, but after that was done, it ran no problem at all. This was also the first game we had featured, as it suddenly appeared in the New and Noteworthy on the iPad - another first. 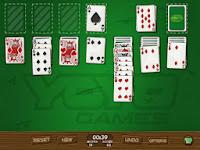 We then started to think about a little Christmas present for the community, and so started work on Simply Solitaire. This was to be a basic card game, just as a promo to what GameMaker can do. Geoff did a set of "wobbly" cards, which set the games unique look and feel and Andrew did his best to break my brain, by adding bugs into the most complex way of writing a simple card game ever devised. I jumped in and tried to help sort it out, but as this was my first real use of GameMaker, it was a shock to the system, not least because the way Andrew coded was nuts. Growing up with GameMaker, he doesn't think the way a traditional games coder does, and that makes his game code a little strange - to say the least. Still, after much cursing and swearing, and calling him Susan, we got it working and submitted it to Apple and it made it in time for Christmas.

Then something unusual happened in France. We've never been able to figure out exactly what or why, but it took off. Certainly Christmas helped, lots of new iPad owners were looking for free games, and this helped push the downloads up. In one day a alone we got over 77,000 downloads. Over Christmas we got to not only the number one card game, but the number one FREE game in several countries. It was a staggering achievement for something that was supposed to be a test - a promo. The only reason for making it, was for the YoYo Games logo in the background.

On the 28th December, it hit the Number one free app in the US, and we had a massive number of users for the 1st time. We decided to try and push out a quick fix for a minor issue, and in pushing too hard, made a fatal mistake. We simply didn't test enough, only Stuart and I really tested it, and 2 people testing for a few days, compared to the now hundreds of thousands is no comparison. It blew up - badly.We lost our top spot as reviews reported it was broken, and users were warned not to update. Sandy wasn't happy, and decided it had done it's job anyway, so to just ignore it and let it die.

Russell and I however, had other ideas....  We really wanted to try out the new in app advertising, and figured with the number of users Solitaire had, it could be interesting - and we didn't really want to let our biggest hit so far die either. In very early 2011, we fixed the issues and added a small advert in the lower right hand corner and push out the update to see what would happen. 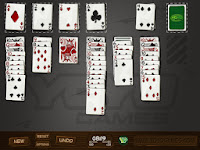 The result totally surprised us. Aside from fixing the issues and keeping our users happy, we suddenly started getting in good money from advertising. In fact, not just good - great money from advertising - at which point Sandy forgave us for ignoring him, and promptly told us to add it to the other games. It's always been a problem; how to monetise users on a free game, and in this case, ads work - but they don't always. We tired adding adds to Skydiver and Maddening, and then suddenly realised that, yeah.... ads don't always work, but Solitaire was still doing well, and we still had a great user base, and income from it. Even when talking to some ad companies, they've been surprised at the number of impressions we've gotten per day, and have wanted a bit of that action.

In January, Sandy also decided he wanted to get onto Android, and so while Russell set about doing that port, the PSP version of Green Tech was finally ready to go. Malcolm Collins - another rescue case from Realtime Worlds pushed the game through submission (physically sometimes, or so it felt), and it was finally ready to be released. It didn't do amazingly, but it was our first game on console, so we were reasonably happy, but we still really didn't like the submission process.

We hoped this was just an issue with the first game only, but time would tell, and tell badly...
Posted by Mike at 7:26 pm