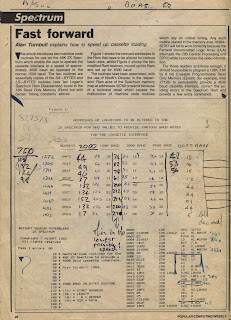 So, I got this I think around 1985, second hand again. This was very cool though, it showed how to make your own turbo loader! Now I still didn't really understand it at this point, but I was able (with the aid of an amazing tape deck) to make a screen grab load at an amazing 6,000 baud! This is microdrive speed; from a NORMAL tapedeck! It just blasted in! I was also able to load data in via a slightly odd pattern so the screen would come in backwards, and even from both directions at once! Normal spectrum turbos were 3,000Baud (with the original ROM routine at 1,500), so I had great fun fiddling with these routines.

Somehow I envy you. I was too young and i lived this era without noticing first the power of the machines i had at hand. I only got the actual specs of my C64 when *it* was +10 years old. And by then, i barely grasped the concept of "stack".

Well, sames true for me though... If I was a couple of years older, I might have been able to write games while at school and could have made a fortune! I Just didn't quite make it in time. Early games were technically simple - you just had to make one. By the time I got into it, they were getting technically complex and they took time. :(

Still, it was a fab time... If anyone say the BBC program Electric Dreams, I found it interesting that the boy still loved to play with a BBC. He still found programming fun. It's odd that you just don't get that with PC's.....